Waiting to go on at the Royal Music Hall

Music hall life was often far from the glamour and glitter we might imagine as this description of a dressing room by singer Lilian Warren shows. She is being interviewed for the trade Paper The Era in 1905 and remembers how artistes would apply their make-up by a ‘small piece of candle’ and a mirror which they supplied themselves. She tells of a music hall in Aberdare where thirteen performers shared one dressing-room where they clubbed together to make the room more acceptable. Lilian bought coal for the fire and the other girls provided the candles. By the time of her interview there had been a marked change with more comfortable, clean dressing-rooms provided.

Jenny Hill, ‘The Vital Spark’ became a successful and respected serio-comic but started life in poverty. At a young age she was articled for five years to the Bradford Tavern and her life was not her own. She started work cleaning the bars at a very early hour and then was expected to be changed and in the singing room by mid-day  to harmonise with the drinkers. She often worked until 2am and food was scarce. Jenny died in her late forties and her early life took a great toll.

Marie Lloyd was known as being kind-hearted and was well aware of class distinction and the poverty of the working classes. One day she was leaving a music hall at the end of a performance when she found a group of children round the stage door. They had no shoes and generous Marie took them to a local shop and bought them boots. The next day they were at the stage door again but with no boots. This was recounted by another performer who was with Marie Lloyd at the time. 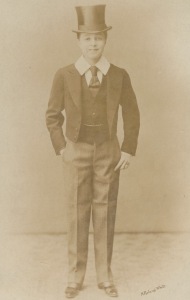 Vesta Tilley encountered a different kind of behind the scenes experience when performing at a dinner for ‘the poor of London’ given by the King. She arrived at a large building in the city wearing her Eton schoolboy costume and found there were several rooms being used for the dinner. She was running up and down the stairs trying to find the right room passing various officials on the way. Vesta heard one of them indignantly comment that the problems were not helped by these boys getting in everyone’s way.

In her autobiography Vesta Tilley remarks on the rivalry that could exist between performers amid the desire to be top of the bill. There could be appropriation of a successful artiste’s songs or of part of their act and music hall managers were often unsympathetic as they could pay the imitator less money. Vesta felt that in some cases the audience wanted a particular song rather than a particular singer. She mentioned the case of mimics such as Cissie Loftus who was acknowledged as an excellent performer but would have songs lifted from her act by others who made little attempt to portray their subject in a way that was recognisable to the audience.

Thanks to the British Newspaper Archive, Recollections of Vesta Tilley, The Early Doors – Harold Scott