So here we are coming to the end of the pantomime season. In Victorian and Edwardian times we could have witnessed music hall stars dressing up in gorgeous finery as Prince Charming or Aladdin. Elaborate hats and hairstyles were the order of the day with costumes of silk and lace which  would hopefully inspire awe and wonder in the audience. Here are just a few of these wonderful women. 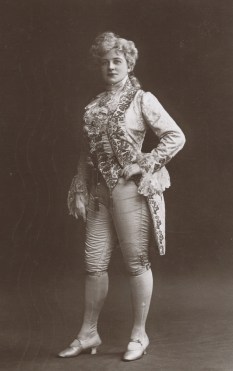 May Beatty as Dick Whittington

From left to right: May Beatty as Dick Whittington, Dorothy Ward as Robin Hood (smoking!), Carrie Moore in Cinderella and Hetty King as Aladdin.

Marie Lloyd played the part of Red Riding Hood at the Theatre Royal, Drury Lane in 1892. At one point, Augustus Harris who was managing the production, wanted Marie to say her prayers before going to bed in her grandmother’s cottage. She knelt down and clasped her hands but instead of saying her prayers suddenly felt under the bed for the chamber-pot. Not finding it, she searched the whole room, accompanied by loud laughter from the audience. Augustus Harris did not join in the laughter and Marie was close to getting the sack.

Pantomimes would often run for three months and provided a steady income in a precarious world. There could be other perks if the show was successful as the trade paper, The Era, tells us. On the last night of The Forty Thieves at the Theatre Royal in Hull the star, Miss Annie Montelli, was presented with a silk umbrella, a dressing-case, a box of gloves and a pearl and coral ring. It’s not clear if these gifts were from admirers or the theatre management. David Beattie, in the same production, was given a silk handkerchief and tie, a cigar case and cigars, a large pork pie, a Madeira cake, a bologna sausage and a bottle of whisky by his admirers in the audience.

Birdie Sutherland took on pantomime roles and in 1901 described as the ‘bountiful Birdie Sutherland’ was engaged to play in the Drury Lane panto to be produced in New York. She had become a household name some years earlier when she sued the Hon.Dudley Majoribanks for breach of promise. The engagement had been announced and then denied by the young man’s father, Lord Tweedmouth. The newspaper reports take an amused tone, assuring us that the couple were devoted to each other with Birdie becoming ill and retiring to the country on the break up of the relationship. The Hon.Dudley was sent to Canada in the hope of curing him of his infatuation with Birdie. When the case was heard the court was beseiged with people wanting to enter but numbers were restricted and those present heard the Lord Chief Justice find in favour of Birdie Sutherland, awarding her £5000 damages plus costs. There is no comment from Lord Tweedmouth. A bit of an “Oh yes she will. Oh no she won’t” situation. Sorry, couldn’t resist it. The bad jokes are the best!

Thanks to the British Newspaper Archive