The name Harry Gordon Selfridge, founder of the London department store, was linked to some of the most popular and sought after women of the day. His generosity towards them knew no bounds and age did not diminish his enthusiasm for being seen in their company. In the early 1920s Mr Selfridge saw a performance by the Dolly sisters and was immediately struck by the beauty and talent of Jenny Dolly. I’ve never understood why he chose Jenny on sight alone as the Dolly sisters were identical twins. Jenny and Rosie Dolly, birth names Yansci and Roszika Deutsch, were born in Hungary and moved to the States when they were twelve, beginning a dancing career in the theatre that would make them household names in Europe as well as America. They started in vaudeville making up their own dances, their mother putting together the costumes, and gradually got themselves noticed with their liveliness and enthusiasm although their singing seems to have been mediocre. They had that indefinable something made even more special by the fact that they were identical twins.

The Dollies appeared in the Ziegfeld Follies and in films, trying solo careers and then getting back together. They came to Europe in 1920 and wowed London audiences with their costumes and their style. By this time they had learned that sumptuous costumes and stage sets put them in the public eye and made them memorable. This together with their vitality and sheer personality made up for the fact that they were not the greatest singers and dancers. They were popular backstage, being generous and friendly towards ordinary theatre workers. During their stay in the capital they were thrilled to be taken up by London society, dancing with Edward, Prince of Wales and attending parties thrown by the rich and famous.

They had a good sense of fun and there are stories of them putting their identical appearance to good use. On one occasion it is said that Rosie was invited to lunch by an admirer who was getting a little too keen and she ate her way through a great deal of food before excusing herself for a short time. Identically dressed Jenny replaced her, proceeded to say she was still hungry and demolished another mountain of food. The admirer was keen to escape from this particular lunch date.

The Dolly Sisters moved to Paris and were equally popular there. They had become aware of their own worth and in 1926 they sued the management of the Moulin Rouge Music Hall for 500,000 francs for breach of contract. They were unhappy that Mistinguett, a famous revue star, was topping the bill. The Moulin Rouge management counter-sued for the same amount of money as the Dolly Sisters had walked off in the middle of a rehearsal and joined the cast of the Casino de Paris. They won their case and were awarded the full amount of damages plus costs. They became members of the smart set, gambling in Deauville and following the social season. They were known for arriving at the casino dripping in jewels, gifts from wealthy admirers, and gambling vast amounts of money, often bank-rolled by those same wealthy individuals.

Mr Selfridge was one of those admirers, showering gifts on Jenny and accompanying her to the casino, handing her wads of notes with which to gamble. He is said to have proposed to her several times but she refused to marry him. Selfridge was in his seventies by now and using his diminishing fortune to indulge the woman he had fallen in love with. He helped her buy and furnish a house in Paris and when Jenny had a serious car accident he paid medical and care bills. There are accounts that Harry Gordon Selfridge spent as much as twenty million dollars mainly on Jenny Dolly but with Rosie receiving expensive gifts as well. He eventually lost control of his department store ending up in debt and with unpaid taxes. 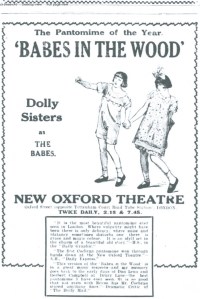 It is hard to imagine that the Dollies had anything other than a happy ending but sadly this was not the case. The world they knew was disappearing and other stars were taking the stage. Jenny never fully recovered psychologically or physically from her dreadful car accident and committed suicide. Rosie lived for almost thirty years without her sister. In an interview in the 1960s Rosie Dolly said, ‘I found out that America has changed— I’m in New York, old friends you call up when you arrive – they’ve forgotten you. They don’t call back.’

If you’d like to know more about the Dolly Sisters there is a great biography The Delectable Dollies by Gary Chapman published by Sutton Publishing.