Preparing for an exhibition to accompany a one-woman show about Vesta Tilley, featuring Claire Worboys  so blog time is limited. This is mainly pictorial which makes it easier for me and, with a bit of luck, interesting for you. A new addition to the collection is Mignon Tremaine, a singer and dancer with a name I couldn’t resist. 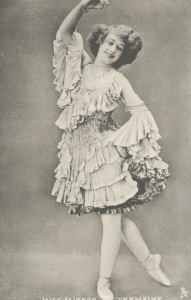 Vesta Tilley impersonated men who were very recognisable to the music hall audience. Her costumes were made by tailors in Bond Street, London and were meticulous in their detail.

Here, she is a curate and makes it work through facial expressions and mannerisms as well as costume. 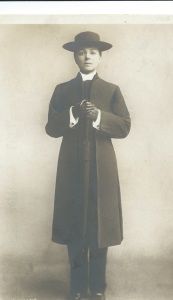 Ukuleles are popular again and we can nod sagely and point out there is nothing new under the sun. This is probably a later card as the young women have short hair, possibly wigs, and strappy tops. Eccentric dances to accompany songs were popular in earlier music hall and, although I subscribe to this form of dancing, it’s not generally found on theatre stages these days.

Lastly, an advert for the Diving Belles, mentioned in a previous post. Daphne obviously caught the publics’ interest as she is often mentioned in reverential tones. As leader of the troupe she has the privilege of sitting down. You can click on the advert and dance picture to get a larger image.